Following on from the earlier experiments in breast modification and electrode calibration it was time to stimulate the newly enhanced assets and further assess breathing functions.

After instructing the subject into the vacuum sack the breast electrodes were placed on the recently engorged tissue and connected to both channels of the E-Stim 2B under the supervision of Grimly. Applying the vacuum pressure gave a firm electrical contact and immobilised the subject further. The MSA Millenium mask was applied and connected to the Squeeze to Breathe circuit which was operated by Nurse Feendish. 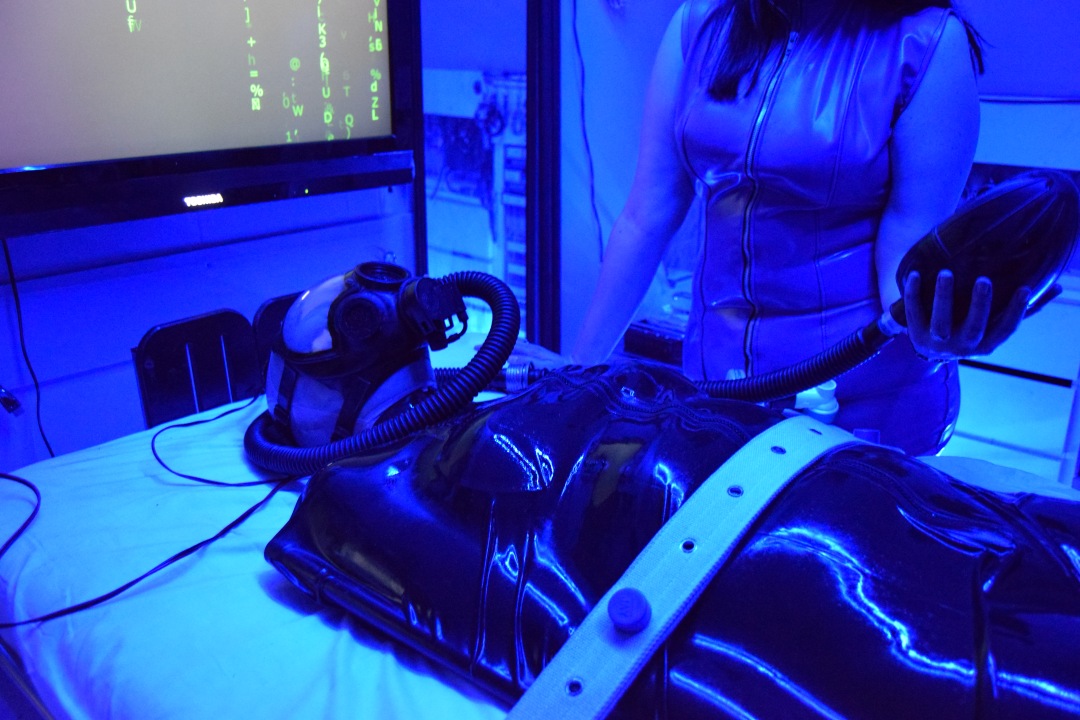 Electrical stimulation of the breasts appeared to cause moaning sounds to emit from the test subject and an increase in respiratory rate. This slowed slightly on full inflation of the bag valve and silenced the airflow through the tubes. Releasing the pressure in the bag valve restored normal breathing function and sounds.

Increasing levels of electrical stimulation on the breast tissue was coupled with manual vibration of the genital region. Unfortunately due to the positioning of the vacuumed latex a good contact could not be established. This therefore left the subject in a heightened state of arousal but did not result in any orgasmic activity.

A baseline threshold for electrical stimulation of the breast tissue was established for future reference. This remained in the pleasurable range and can be adapted in future for more intense sensations. The subject responded well to breath manipulation and shows promise for extended experiment conditions. Whilst an unintentional side effect the subject has been conditioned to not associate intense stimulation with orgasmic release.

When I first saw the MSA Millenium mask I knew I wanted to try it! And having visited the Feendishes before had always been curious to step into their breathplay kit. I have only really engaged in manual breathplay before now and getting into controlled circuits is definitely on my wishlist. I kept wanting Mrs Feendish to push me harder, and I may well regret writing that the next time I step into the Feendish lair!

Vacbeds are always great fun. I’ve been lucky to try out quite a few different designs. Grimly’s one is compact and holds a really good seal. Unlike other ones I have tried it’s actually fairly difficult to move around inside it.

I had played with the breast electrodes before with Mrs Feendish, but doing this after the breast treatment earlier in the day made the whole area more sensitive. I’m not sure if it firmed them up any, but it was a great feeling trying.

I always love visiting the Feendishes 🙂

One thought on “Breast & Breath Test 1”